The History Of The Tractor Trailer

Home » The History Of The Tractor Trailer Tractor trailers, also known as semi-trucks, semi-trailer trucks and 18-wheelers, are responsible for transporting over 70 percent of the goods and commodities in the United States. Tractor trailers are typically an 18 wheeled truck that includes the truck (the tractor) and the trailer. The tractor trailer has changed a lot since it’s conception and we have laid out some of that history below! 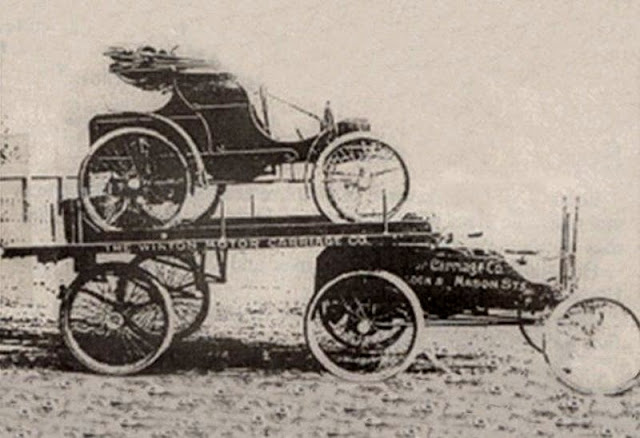 The first semi-truck, which Winton called an Automobile Hauler, used a modified short-wheeled touring automobile (the tractor) with a cart (the trailer) attached to the back of it. The platform sat on top the engine portion and rested on a pair of wheels on the other end. Most cars and trucks have engines in the front, but this car had its engine in the back. The platform on this tractor trailer could only hold one vehicle. Winton did not pursue the design of his first semi-truck, but others continued to expand on the concept.

Expanding On The Concept:

August Charles Fruehauf, a Detroit blacksmith, built a carriage for someone who wanted to transport his boat in 1914 and he officially called the carriage a semi-trailer. It was a big success, and he went on to develop the carriage for many other uses, like hauling lumber. In 1918 he incorporated the Fruehauf Trailer Company, which is still a leading maker of semi-trailers today. John C. Endebrock had experience building horse carriages and used his knowledge to develop what he call the “Trailmobile”. It was an iron chassis that was mounted on wheels and springs that could be trailed behind a Ford Model T. It was designed so that it would be possible for a single person to hook the trailer to the car, earlier trailers needed three people to hook up chassis to the car. In the 1930’s, George Cassens was responsible for taking the vehicle hauling business to the next big step in it’s evolution. Cassens attempted to ship the new cars directly to the buyers and realized the shipment cost were extremely high for the car manufactures. Cassens saw an opportunity and offered to haul the cars from the manufacturing site to the car owners with his four-car auto trailer that was pulled with a two-ton Dodge truck. Mack Trucks were one of the first innovators of heavy-duty commercial vehicles. Mack was founded in 1900 and developed and manufactured its own engines that made use of an automatic starter, which made the hand-crank obsolete. From 1929 to 1944, Mack produced 2,601 semi or full truck trailers and became known for building tough and durable trucks. The logging industry had an impact on the popularity of the semi-truck. Peterbilt, a truck company, started selling its semi-trucks in 1939 and were used exclusively to haul logs from the forest to the lumber mills. T.A. Peterman, founder of Peterbilt, refurbished army trucks and equipped them with trailers specifically to haul logs. Over the past 100 years, the two wheeled semi-trailer that Winton invented to haul a single car has turned into the eighteen wheeled tractor trailer with three axels that we know today. Tractor trailers now transport 10.23 billion tons of freight in the United States, which is about 72.5% of the nation’s freight. All of this is possible due to the evolution of Winton’s two wheeled semi-trailer. How To Be A Defensive Driver How To Avoid Distracted Driving

Distracted driving is anything that takes you’re your eyes, hands, or attention… How To Prepare For Truck Driving School

Starting a new career as a truck driver can be challenging, but… 5 Hobbies For Over The Road